That's Theon Greyjoy. He thinks his name is Reek now because of torture. And that's Roose Bolton's bastard, Ramsay. He's probably the second worst and most disgusting person in Westeros...For now! But seriously, Ramsay Snow is the total grossest. He hunts girls and feeds them to his dogs, too, it turns out.

REMINDER: Jamie and Tyrion actually love each other. Rare within the Lannister Family.

I wonder how long it takes an adult with one hand to learn how to be a super great sword fighter... Err, how many episodes?

Roose Bolton rides home to the Dreadfort accompanied by his wife Fat Walda Frey (Take it easy, that's what she's called in the books! I certainly didn't make that up!). Never has anyone shown so much love and patience toward his bastard; his insane, evil, vomit-inducing, screw-up, bastard. The Greyjoys have taken Moat Cailin. There's some deep book junk that I could go into about why Moat Cailin is important, But let me just summarize: Think of it as the "The Twins" of the KingsRoad. Ugh... so nerdy... let's try again. Its position in the southern part of "The North" and its proximity to the "KingsRoad" (the road that goes North from King's Landing all the way up to The Wall.) make it a "Must Have" if you want the North to be able to have a connection to any lands South. Otherwise it's a like a bottleneck and nobody can go any further into the North without going around by Sea. yuck... the end of all that. This is the first time that has been mentioned and I'll bet you didn't catch it! "Go win Moat Cailin and I'll make you a Bolton!" Roose Bolton was basically saying.

REMINDER: this is Shae!

REMINDER: shae and Tyrion used to have sex a lot and are in love with each other.

They didn't do a good job of showing it. But Joffrey chopped up Tyron's wedding present book cause he's a dick.

REMINDER: Stannis has a wife named Selyse who is insane.

REMINDER: (man they are expecting you to remember a lot this week!) Stannis and Milisandre have been doing it in order to make killer shadow babies. That's what's with all the weirdness at that dinner table. 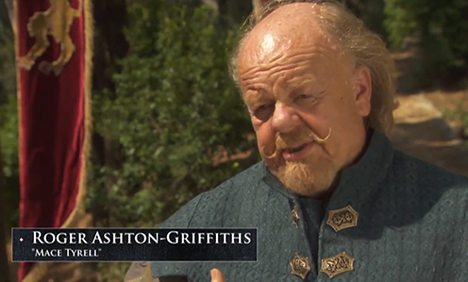 THIS guy is Mace Tyrell. He's Lady Olenna's son and Queen(yay!) Margery's father. He's a Lord, so you're supposed to respect him, but it doesn't seem like anyone does! I'm not sure how prominent a role he'll play on the show. Just thought it was worth mentioning.

Before I get to the whole wedding reception... (We book readers, and now, you viewers, call this one The Purple Wedding) I just have one thing to say "well, everywhere have their differences. In some places the highborn frown upon those of low birth, in other places the rape and murder of women and children is considered distasteful. What a fortunate thing for you, former queen regent, that your daughter Marsella has been sent to live in the latter sort of place. " Oberyn Martell is the coolest.

On to the reception and murder! The show runners, writers, directors and editors all did a super amazing job with this... SPOILER ALERT! Not really, but read this bold print and decide for yourself. I am the biggest Spoiler Baby there is. I HATE Being spoiled. I don't even watch the part after the episode that says "Next time on Game of Thrones". That said, even I would not consider what I'm about to say a Spoiler. I do not reveal any plot points, names, events, or anything. I am simply going to allude to the fact that either we will, or will not find out at some point in the future (maybe this season, maybe not) That something, that I don't name specifically will or will not happen. So...either continue reading, or skip to past the next image. I can't say much, but in this episode's wedding reception scene, just know, they basically show (among a hundred other suspicious behaviors) exactly what happened to Joffrey, and who did it and how they did it... But it was so good and subtle that you won't ever figure it out until after you know...then you can come back and fully enjoy this brilliant sequence.

But how about the tragic death of one of the series most endearing and beloved villains!? I'm not including a screencap of his face because they did such a good job with making him look actually horrifying and dead.

Anyway! That's the end of this episode!

Luckily, June 6th is a Friday and we can drink a bunch of coffee all day in order to…

Game of Thrones: s4ep1 Two Swords: Scene by Scene Recap (They Think You're Clever Enough To Catch All This Stuff. I Don't)

Ice and fire, get it? That was ‘Ice’. Ned Stark’s Great Sword that Tywin Lannister (the dwarf’s…