Cersei is PRETTY sure that Tyrion, who was just publicly humiliated by Joffrey for the 4th or 5th time, and who has publicly threatened King Joffrey several times, and whose wife has been tormented publicly by Joffrey on several occasions, was responsible for poisoning the King. Who could blame her? Joffrey was an evil, sociopathic and murderous bully, to be sure, but he was also her secretly bastard, inbred love-child... So you can see it from her point of view, too. Who else could could have done it, the other dozen or so people who had open access to him, and who probably hate him, and also benefit richly from his death!?

Ser Dontos has spirited Sansa away from the scene (immediately making her a suspect.) It is a good thing for plots that murders happen when fog and night time only appear where you are trying to sneak off to, and hide the gigantic ship that is waiting to take you away! 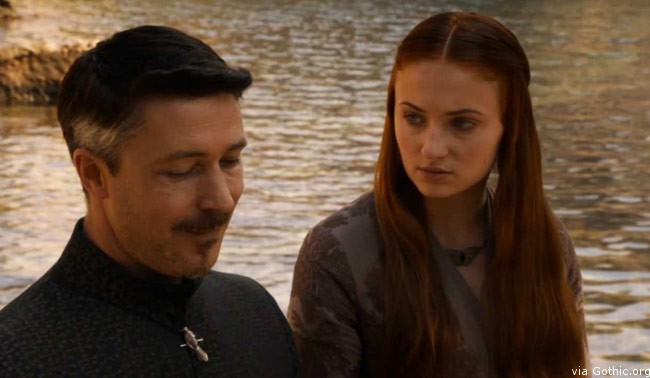 REMINDER: Littlfinger offered Sansa an escape from Kings Landing back when he was leaving for the Eyrie.

Littlefinger (Lord Petyr Baelish) has orchestrated a way to sneak Sansa out after all. He is right, if she would have disappeared at the Same time he had originally left, everyone would have known he was responsible for her escape. He needed someone he could kill to persuade Sansa to leave with him. That someone was the drunk fool Ser Dontos! Smart move, Lord Petyr Baelish. Sorry, Ser Dontos, you ladder rung. Is Margaery the queen still? Why do all her king husbands keep getting killed? Is she gonna marry Tommen? For once, I don’t have much to say about her OR the rest of the Tyrells.

Hate him or hate him a lot, you can't deny that Tywin Lannister knows what he's doing. He has realized that Cersei is getting out of control. So, in order to keep her in check, he talks cavalierly about how Joffrey wasn't a good king right in front of her as she grieves. He's letting her know "you are no good at this. Stop interfering, let me be the king maker" I wonder if she’ll listen! Just when we start to think that Jamie Lannister is turning into the sort of really good guy who WOULDN'T EVER rape his sister at her deceased son's wake...

…This is a complicated scene... If you want to talk to me about it, let's do that in person...I don't want to mistakenly go on record as being on, what could end up, the WRONG side of the PRO or ANTI rape at a funeral debate... It's delicate territory.

We see that even as The Hound is becoming more like Arya, and Arya more like the hound, the disparity between their moral makeup is rather large still. Is the hound right? Has Arya not been hardened enough to survive? Sam is in full-on Mack mode now. Too bad he took that oath to not ever date, kiss or marry women. Looks like Gilly's down! What’s a brother (of the Night’s Watch) to do?

REMINDER: Stannis had Melisandre suck weenie blood out of Gendry, with leeches, so she could make royal blood sacrifices and pray to The Lord of light to kill the pretenders, Balon Greyjoy, Robb Stark and Joffrey... Since Robb and Joffrey are dead now, Stannis is totally sold on Melisandre and The Lord of light. He still trusts Davos, but it's getting more difficult to keep trusting him as Ser Davos keeps NOT coming up with an army while also sending Stannis’ royal blood sacrifice supply across the Narrow Sea.

So, what's a Brother (of the Night’s Watch) to do? Bannish her to stay in a muddy town that is half under ground in muddy tunnels in order to protect her from the rape-ful eyes of his brothers and friends. Regular Casanova.

Prince Oberyn Martell and Ellaria Sand are having more sex when Tywin Lannister slitheres into the room. Tyrion will go on trial and there will be three judges to decide his fate, Tywin, Mace Tyrell (Father of Margaery Tyrell) and now Oberyn Martell. Tywin wants Oberyn to be on the trial and serve on the small council of the new king. This will bring a sort of peace between the Lannisters and the Martells. In exchange Tywin will give Oberyn revenge on The Mountain who killed his sister and her children during Robert's Rebellion. 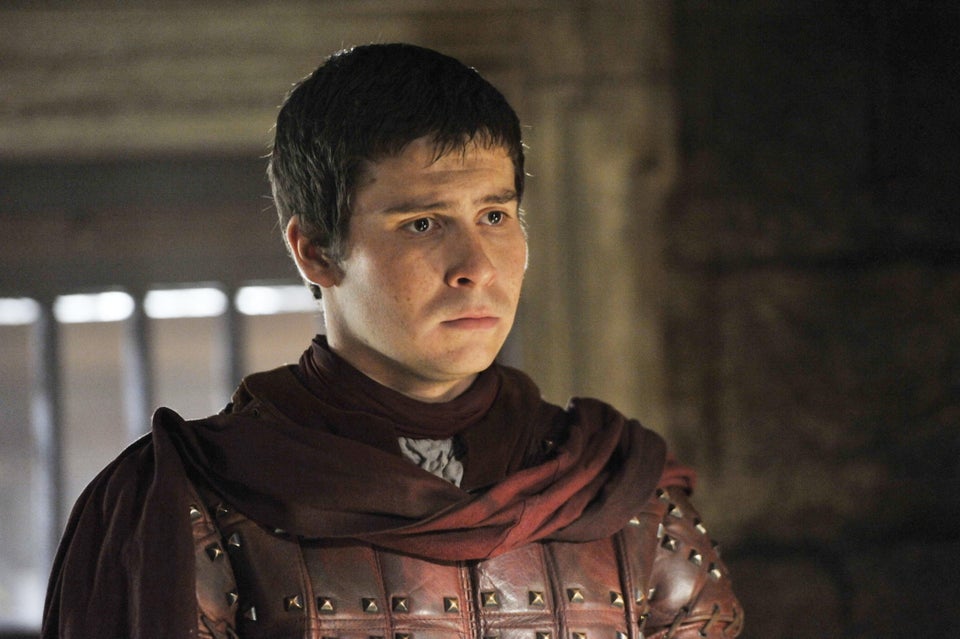 Tyrion has no friends who can testify on his behalf. Varys is called by the prosecution. Bronn was found unfit to testify. Shae is gone. Sansa is gone. And they tried to persuade Podrick to testify against Tyrion. Pod refused. Tyrion, knowing that Pod put himself in danger to stand up for Tyrion, commands Pod to leave the city and get out of danger. My favorite quote from this episode "whenever something bad happens to me I assume Cersei had a hand in it. Say what you will of her but she loves her children. She is the only one I'm certain had nothing to do with this murder, which makes it unique as Kings Landing murders go"

Remember last season when you were all "poor ygritte!" Well fuck her. Wildlings are bad guys!

Everyone wants to go after the Thenns. But Jon is right (for once)...

REMINDER: after the Night’s Watch got their asses handed to them by the White Walkers and that army of reanimated corpses at the Fist of the First Men, they retreated back to Craster's Keep where Rast and the other Night’s Watch mutineers killed Lord Commander Mormont and Craster, causing Sam, Gilley and others to flee to the wall...

Jon is right (for once)…they can't go south to fight the Thenns and Ygritte... They have to go take care of the traitors at Craster's keep who WILL tell Mance Rayder that there are only a hundred guys at Castle Black instead of the one thousand men that Jon Snow told him were defending the castle.

Daenerys arrives at Meereen, the largest and riches of the slave cities... Daario Naharis takes out their hero like a gang banger would. Then Daenerys yells a LOT at the slaves of the masters of Meereen.

Shit’s about to get real, real fast here!

That's the end of this episode!

We're off to see the...God? Did Grey Worm get a super thick accent this episode? Did he always…

Luckily, June 6th is a Friday and we can drink a bunch of coffee all day in order to…