Tommen of the House Bratheon First of His Name(whoa what is the rest of this episode going to be about!?) King of the Andals and the First Men and Lord of the Seven Kingdoms... Father of Kitty Cats!

It was funny to see the gathering in the throne room actually, genuinely happy about naming this genuinely nice kid as king. Imagine if we got to name one those Scripts Howard National Spelling Bee kids as President of the United States... We'd be pretty geeked, initially!

The first real thing that happens here is Queen Cersei comically stepping in between Tommen's and Margaery's long distance gaze. To me this weird moment was the real genuine thing, Cersei purposefully stepping btw Tommen and Margaery. The conversation that followed between Margaery and Cersei seemed pleasant, but I don't think it's going to stay like that.

REMINDER: Last season Cersei told Margaery "if you ever call me 'sister' again I'll have you killed in your sleep" During this episode’s (First of His Name) conversation Margery laughs and says, "I won't know whether to call you sister or mother!" And Cersei buries that and doesn't respond. Margery feels pretty good about it... But Don't you go feeling too good about this conversation guys!

Danerys is still a part of this season it seems. She doesn't know if she can go back to Westeros, claim the throne and be a good ruler. She's realizing that conquering all kinds of cities and then leaving can leave them worse than before. If she wants to have any hope that she knows how to rule, it sounds like she'll first test her Queenly aptitude as the ruler of slavers bay first... And then move on once she stabilizes the area. 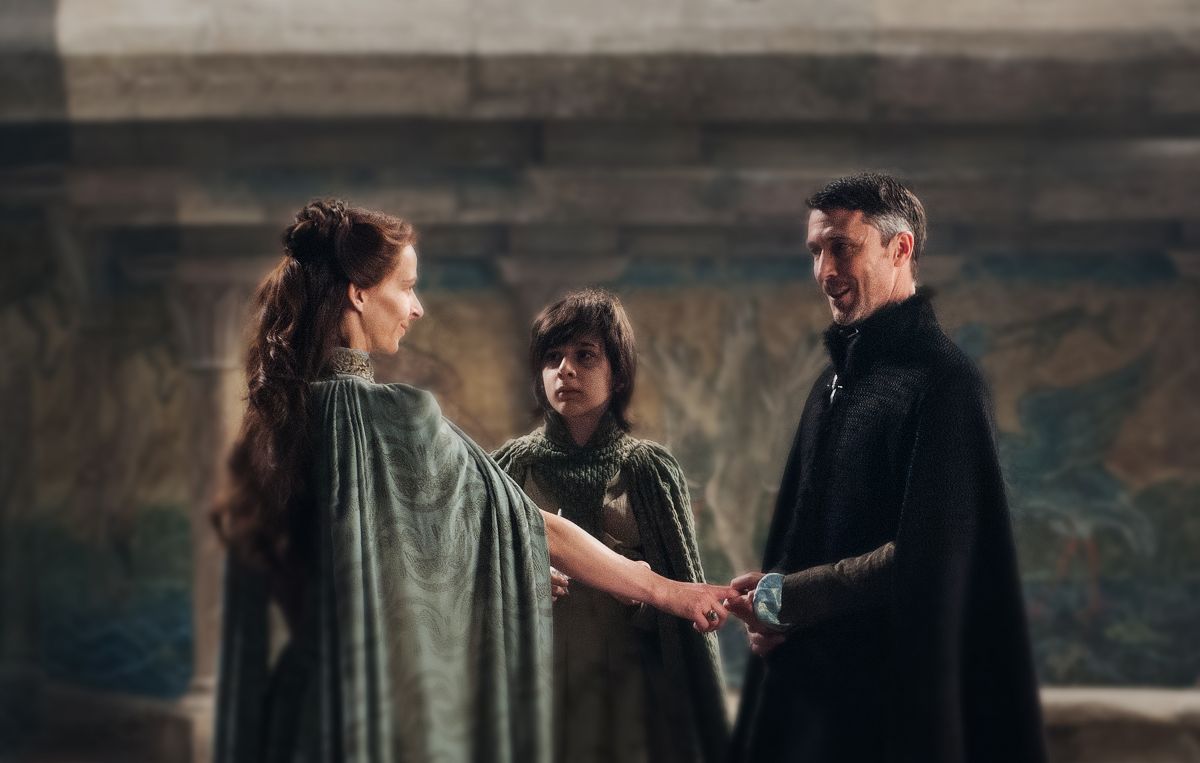 REMINDER: we haven't seen Lysa Arryn since season one. Her husband Jon Arryn was the Hand of the King under Robert Baratheon. Jon Arryn got poisoned and killed, prompting King Robert to travel to Winterfell and ask Ned Stark to be his new hand. While that was happening Lysa sent Catelyn a letter saying that the Lannisters had killed her husband...

The Eyrie great hall (with the moon door) is probably my favorite set. 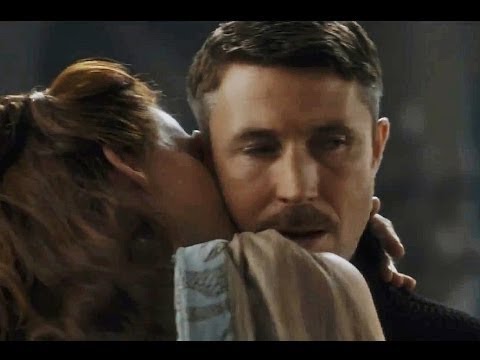 I like how grossed out Littlefinger looks the whole time Lysa's talking.

So, here we learn that Petyr Baelish is the one who planned Jon Arryn's murder and Lysa carried it out and framed the Lannisters for it. This is really what started the chain of events that ended in the War of the Five Kings.

Lysa and Littlefinger get married! Congrats!

Cersei and Tywin have a whole thing... Just take away one thing The Iron Bank Of Braavos has Kings landing by the balls. 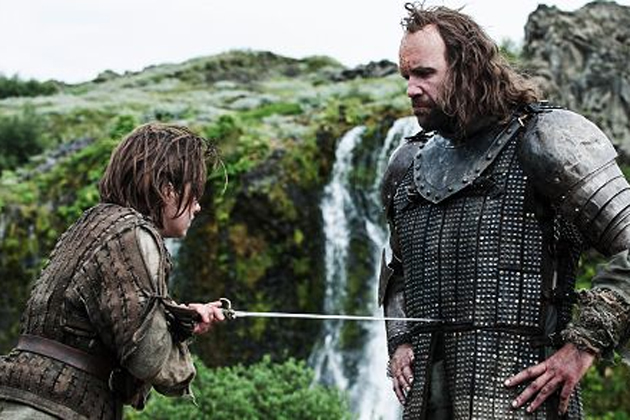 Arya wants to kill all those people. Including the Houd Still. 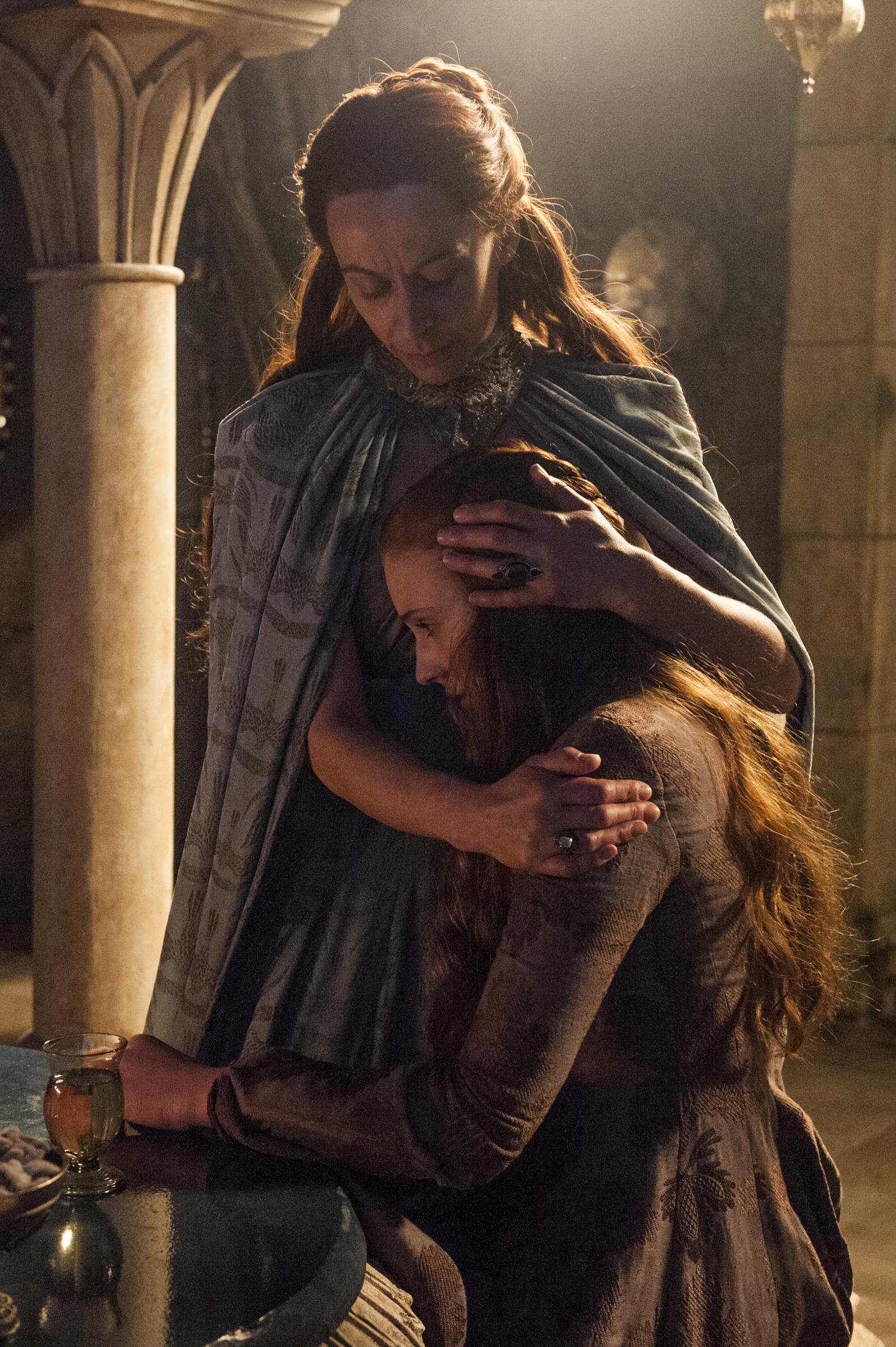 Brienne and Podrick Payne are going to see eye to eye...or help me! We never really got to see very much "water dancing" and I'm glad they showed it here. Things are getting uglier and uglier between Arya and the Hound... Just when I was hoping for a spin-off. Cersei is trying to butter up the judges it seems. 'twon't work.

Look, I might not know all there is to know about cleaning and cooking rabbits, but at least I know step #2...

Bran and Jon are totally going to find each other this episode! There's no way they won't.

Meera reed is such a sadly underdeveloped character...I'm so glad she's getting more camera time... Though I hope from now on it’s due less to possible rape than any other thing... That’s the end of this episode!

Game of Thrones: s4ep6 The Laws of Gods and Men: Scene by Scene Recap (Remember Everything Tyrion's Ever said. It's Important!)

if you want justice, you've come to the wrong place. Braavos! Stannis and Davos go and try to pit…

We're off to see the...God? Did Grey Worm get a super thick accent this episode? Did he always…